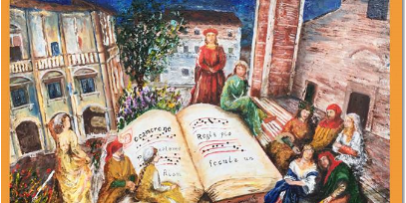 The story is built around ten young narrators from Boccaccio’s Decameron who turn out to be the protagonists of the same tales, which are woven around an adventurous escape fron Florence’s plague into an unconventional convent. After falling into an ambush they end up finally at Palazzo di Pontassieve where in an unrequited love atmosphere they await for the end of the disease and tell the well known 100 novelle.

We are in open square in Florence. The plague-striken dying people are ignored by the indifferent busy merchants and by some cheerful girls whose only care is to have their loving dreams fulfilled. Two men Panfilo and Erminio de Grimaldi compete for wise Pampinea and the Judge’s wife Fiammetta is also a fought over woman between her lover Dioneo and her unlucky husband whom she disrespectfully mocks any time she has the opportunity. Both men are pulled up by cute Sir Ciappelletto suggesting toughness and low consideration for women and not realizing that he is also being teased by another lady. Indeed Elissa makes him believe, as a joke, that she may be attracted by such a rude man…and get rid of him whenever she wants.

Desperate at the idea of marrying old Erminio Pampinea suggests leaving Florence, Fiammetta proposes to separate for better concealment and leads the young girls to the convent in Fiesole. Ignoring the women’s presence Friar Cipolla, who had contributed to quell the Judge and Erminio’s anger to women, advises Panfilo, Dioneo and Filostrato to hide in the same convent too after training them on how to cope with the nuns’ unconventional habits.

Soon after arriving at the convent the three young men disguised as farmers, hide among the workers pretending dumbness. The women too ask for hospitality and the nuns to camouflage dress them up as nuns while Fiammetta has to wear a friar’s tunic. When the workers sing the nuns realize that the men are dumb and let them stay in the convent because as the Badessa says to the disgusted girls: I’s written down that Our Lord believes nothing is more sacred than love”

The girls scandalized at the men’s behaviour decide to try their lovers and invite them into the Badessa’s room. Friar Cipolla who was also in the convent reassures the girls about the disguised and unrecognized girls and gives explanations about the behaviour of the real nuns. Pampinea’s recriminations anyway make him reveal his real identity and his false image as a friar. Fiammetta exults because her marriage is void but soon Erminio the Judge and Sir Ciappelletto come looking for the girls. Friar Cipolla understands the disguise and invites the cheating men to leave the convent and go another way.

The girls are absolutely furious with their lovers and decide yo play them another trick extorting a confesion through disguised Fiammetta. At the end of the confession indignant Pampinea and Erminia hide under the portico followed by Panfilo and Filostrato asking forgiveness while Fiammetta still dressed up as a friar mocks Dioneo again promising absolution on condition that he warms a poor friar’s heart as with Badessa’s. Of course Dioneo refuses and Fiammetta getting rid od her false attire swears she will never be his woman again. All the couples start discussing animatedly but in the end peace and forgiveness prevail.

The nuns find out that the men are able to talk so the abbess decides to drive them away in order to keep the secret. The girls leave the convent too and in the forest meet Erminio the Judge and Sir Ciappelletto t inprisoned by the robbers who quickly surround and take all of them into their dun.

While the robbers are banqueting the men try to get free. Dioneo proposes to let the girls dance as entertainment and while dancing they manage to steal the keys of the prison and let Panfilo Dioneo Filostrato Pampinea Fiammetta and Elisa out while Neifile Lauretta Emilia and Filomena stay there and have fun with the robbers.

At last the young men arrive at Pontassieve where meet Friar Cipolla who’s teaching his altar boys on how honest and dishonest contry clergymen ca be. The robbers comre holding the girls as hostages and toreate the four fuggitive in order toh ave more money but again Friar Cipolla is helpful and cheats the robbers offering Archangel Gabriel’s Feather which can satisfy any request of his possessor unaware that his pupils had substituted it with a piece of coal. He has a prompt explanation: the feather had been changed into coal in S.Imenegondo del Quadrivio’s martyrdom. After hearing that the chief of the robbers gives up and suggests all of them make friends.

After peace has been restored and the three old cheaters’love aspirations have been quenched the young people can happily unite in marriages blessed by false Friar Cipolla but being not safe yet to go back to Florence decide to stay longer and have fun singing dancing and telling love stories.